As an undergraduate student at the Arizona State University/Center for American Archeology Geographic Information Systems and Remote Sensing Archaeological Field School in 2008, I was trained in the use of geophysical remote sensing equipment, geophysical data management, and IDRISI Andes. I also conducted in-depth research on a topic of my choice.

Of course, my research question development was at the level of an undergraduate so my research objectives are not as clear as they would be had I done the project today. What I did do:

The following are selections from my paper and my GIS analysis. (I will not post the entire thing online or share it without permission of the CAA as it could be used to locate and disturb the site. Please contact them if you are interested in this paper.)

The first goal of this investigation is to see whether archaeological excavations and total surface pickups have a noticeable, identifiable effect on magnetometry, resistivity or ground penetrating radar data. I will attempt to define the characteristics of anomalies created by archaeological investigations and describe their qualities in terms of the remote sensing data. By doing this, I will be able to learn about the characteristics of the prehistoric features that are likely to be detected by these methods of remote sensing based on what we know about the qualities of the archaeological investigations conducted at Mound House.

Secondly, I will attempt to characterize the relationship between areas of high artifact concentration (debitage, ceramics, limestone, bone) and remote sensing anomalies. These comparisons will allow me to make qualitative conclusions about the relationship between subsurface features and surface concentrations of artifacts considering that the maps generated over the past forty years have not been entirely consistent and thus cannot be statistically compared.

On an aside, I also investigated the patterning of the magnetic dipoles in an attempt to identify any recognizable patterns indicating regular disturbance. Knowledge of dipole patterning will also aide in the location of future excavation units when compared to the raw magnetometry data, whether to target likely historic features or to avoid them.

Ultimately, my goal is to combine the results of these analyses to predict the likely locations and qualities of the subsurface features that are characterized as anomalies in the remote sensing data. This project is meant to serve as a tool for the future analysis of remote sensing data and to give a new perspective on the Moundhouse site layout by combining archaeological and geophysical data from many different years of investigation.

In the magnetometry data collected this year, I was able to see a visible but not necessarily statistically significant difference between a recent excavation unit and the surrounding matrix. This suggests that the magnetic effects of excavations are limited temporally, but on the other hand shows that regular pits excavated into the ground do not account for the strong magnetic anomalies in this data. In order for such strong signals to be measured, the soils below the surface would need to have significantly higher or lower magnetism than the soil in surrounding area. This could indicate that we are likely to find burned or otherwise modified ground below strong magnetic anomalies.

As far as resistivity data, it is unclear how the high and low values of this measure relate to prehistoric features. Excavations during this field season will certainly help to answer that question, but as far as my analysis is concerned, I do not have any conclusions. 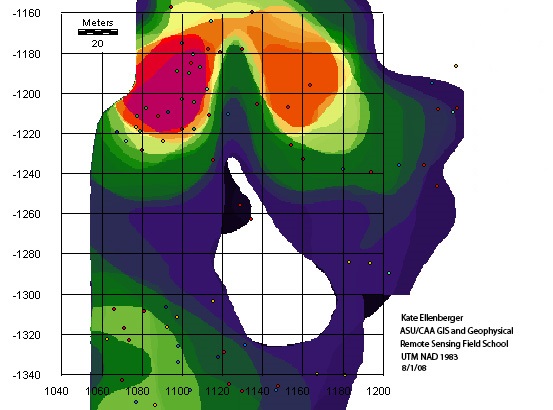 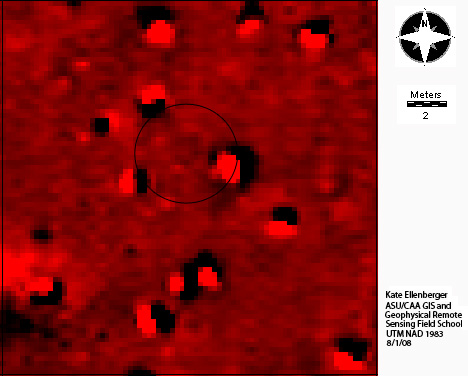 Close-up of the location of an archaeological excavation unit from the prior year. (Key, landscape features, and orientation withheld.) The majority of the units from 1986 and 2007 seasons showed the same qualities as the surrounding matrix in the magnetometry and electrical resistivity data. On an amusing sidenote, one of the anomalies in the data seems to be the buried fencepost used as site datum from 1976, dug up after remote sensing during the 2008 field season. One interesting note is there were no magnetic anomalies in the location of the excavated units; they are distributed throughout the map fairly evenly otherwise. Magnetic gradiometry map. (Key, landscape features, and orientation withheld.) The dipole anomalies (black/white paired pixels) were difficult to set apart from the rest of the data visually, so I conducted a clustering analysis which determined there were some specific areas of clustering in the data which warranted future historical archaeology-focused investigation.